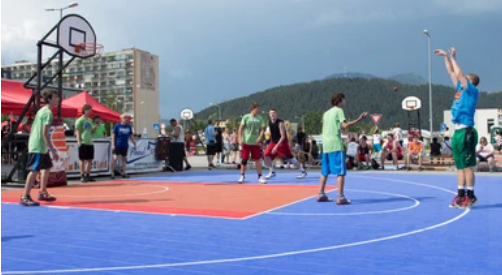 It is painted on every recently built court for the game of basketball....and it's called the Three-Point line. Whoever thought that 35 years ago painting a simple line on a basketball would change the game.....forever.

Every player today dreams about becoming the best 3-point shooter in the game. However, if they played the game starting 35 years ago, that would not be even a thought in their mind. This line, for High School player is measured at 19 feet, 9 inches; for NCAA it is 22 feet, 1.75 inches; and for the NBA is 23 feet, 9 inches from the basket.

History of the 3-point line

The three-point line was first tested at the collegiate level in 1945, with a 21-foot line, in a game between Columbia and Fordham, but it was not kept as a rule. There was another one-game experiment in 1958, this time with a 23-foot line, in a game between St. Francis (NY)[a] and Siena. In 1961, Boston University and Dartmouth played one game with an experimental rule that counted all field goals as three points. In 1962, the St. Francis (NY) head coach, Daniel Lynch, once again made the suggestion of a 3pt line to the New York Basketball Writers Association.

At the direction of Abe Saperstein, the American Basketball League (ABL) became the first basketball league to institute the rule in 1961. As commissioner of the new league, Saperstein wanted to add excitement to the game and distinguish the league from the bigger NBA. He hoped the three-pointer would become basketball's equivalent of the home run. "We must have a weapon," Saperstein said, "and this is ours."

After the ABL shut down in 1963, the three-point shot was adopted by the Eastern Professional Basketball League in its 1963-64 season. It was also popularized by the American Basketball Association (ABA), which introduced it in its inaugural 1967-68 season. ABA commissioner George Mikan stated that the three-pointer "would give the smaller player a chance to score and open up the defense to make the game more enjoyable for the fans".[8] During the 1970s, the ABA used the three-point shot, along with the slam dunk, as a marketing tool to compete with the NBA. Its ninth and final season concluded in the spring of 1976.

Three years later in June 1979, the NBA adopted the three-point line for a one-year trial for the 1979-80 season, despite the view of many that it was a gimmick. Chris Ford of the Boston Celtics is credited with making the first three-point shot in NBA history on October 12, 1979.

The first official NCAA game with the three-pointer set at 19 feet, 9 inches took place on November 22, 1986 when North Carolina State defeated Navy 86-84 in the Tip-Off Classic at the Springfield Civic Center in Springfield, MA.

How it changed the game of basketball

Simply put, the more three pointers made, the more points you score. This has forced teams to adjust their strategies both on offense and defense. Any good offense must take advantage of the 3-point shot. Get penetration, then dish it out to a wide-open player with an open shot at a three. For defenses, it has forced them to play more outside in the perimeter, leaving the inside open to the bigger centers in the league. It takes a lot of study and modiifications to the game as it has really stretched the court.

It also has been somewhat bad for the game. Younger players now simply want to shoot 3-Pointers all game long. It is a lower percentage shot which can be given up to make a high percentage layup. It also has changed players shots as now they all want to practice the 3-point shot right away, which can cause issues with form and balance on their shots.

In the end, we love it

In the end, we love the 3-point shot as it makes the games more exciting and it seems almost like a game is never out of reach.

Players like Ray Allen and Steph Curry have brought more attention to the sport with their high percentage field percentages on their 3-point shots. This, in turn, sells more tickets and makes the NBA lots of money.

Today, the 3-point shot is one of the most influential changes the games has seen and may ever see in the history of he game. I think most believe it has been good for the game and we wish it a happy 35th birthday.